I’ll admit this review is a review of a book that I read for a college english class. I don’t normally review things I read for school (mostly because I often don’t like them), but since this is a fairly famous and modern novel I thought I would do one anyway. If you’re interested in hearing about a classic utopian and eco-friendly book, then stick around for this!

Synopsis: “Ecotopia was founded when northern California, Oregon, and Washington seceded from the Union to create a “stable-state” ecosystem: the perfect balance between human beings and the environment. Now, twenty years later, this isolated, mysterious nation is welcoming its first officially sanctioned American visitor: New York Times-Post reporter Will Weston.

Skeptical yet curious about this green new world, Weston is determined to report his findings objectively. But from the start, he’s alternately impressed and unsettled by the laws governing Ecotopia’s earth-friendly agenda: energy-efficient “mini-cities” to eliminate urban sprawl, zero-tolerance pollution control, tree worship, ritual war games, and a woman-dominated government that has instituted such peaceful revolutions as the twenty-hour workweek and employee ownership of farms and businesses. His old beliefs challenged, his cynicism replaced by hope, Weston meets a sexually forthright Ecotopian woman and undertakes a relationship whose intensity will lead him to a critical choice between two worlds.” 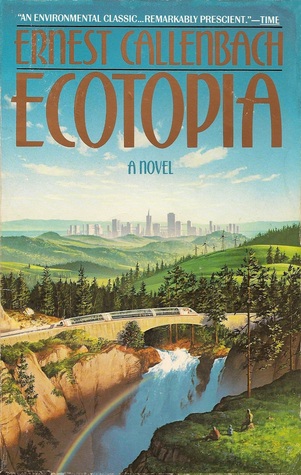 First of all, this book was definitely written for college age people and above and that is who I would recommend it for. It includes mature topics, language, and also confusing economic talk (which mostly didn’t make sense to me…). If this book didn’t deal with economics and politics, I might have actually given it three stars, but those kind of heady and worldly topics aren’t my thing (which you may have been able to guess considering I run a book blog that focuses on fiction). However, the story was actually very well written and made sense besides the confusing parts, which is why I managed to enjoy it instead of just viewing it as tedious schoolwork.

So the great thing about this book was the way it was put together: it was a mixture of journalism columns and private diary entries. This was great because it let the main character, William Weston, be very full and three dimensional. I did enjoy the diary entries a lot more, because it was more stereotypically story-like, whereas the newspaper bits were generally the parts that included politics and economics and details about Ecotopia. I can see why they were useful to the worldbuilding, though, so I think that this structure worked really well for the novel.

The one thing that seriously contributed to my two star rating is the main character. He was, to me, a very annoying character to read about and I didn’t relate to him very well so that didn’t help. He was a stereotypical American buisnessman from the 70’s (which is when this book was written). Certainly I understand the cultural aspects this provided for the character’s interactions, but I personally didn’t like him very much, which led to me not liking the book as much as I could have.

Thanks for reading! Have you ever enjoyed a book you read for school or work?