I received this book as a gift when I was participating in a production of the musical The Addams Family, which was super exciting. I wasn’t actually planning on reviewing it, but once I had finished reading I found that I had several things to say about the content and organization of the content, so here I am!

Synopsis: “From the dark mind of everyone’s favorite cult character, Wednesday Addams, comes this literary collection of quotes and spooky short stories!
This gift book is perfect for fans of all ages and includes quotes from Edgar Allan Poe, Shakespeare, Mary Shelley, and more. There’s no doubt that Wednesday’s Library is sure to be a favorite of girls everywhere!” 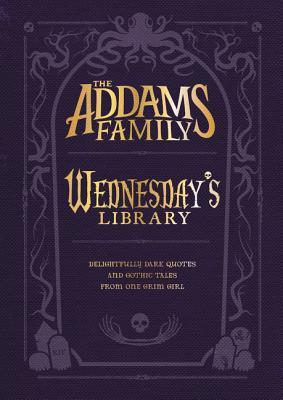 I was pretty excited about giving this a read. It is a fairly short book as well as an easy read and although horror isn’t my type of thing, this was based on The Addams Family so of course I was into it. I have to say that the quotes were definitely well selected and I thought that the comments Wednesday made next to them were in character and fairly humorous. I appreciated that the last few pages of the book held more information regarding which works were quoted from since I could learn a little about the works and also find some classic gothic novels to put on my TBR.

The problem I ended up having with this book was the lack of diversity. The cover had promised “dark quotes and gothic tales”. I did expect there to be a lot of quotes and poems from works not of this century, but in reality there were no quotes from works after the eighteen hundreds. This didn’t bother me much, but I think the book might have been more engaging and relevant to young readers if more works were brought into the mix and if a few quotes or poems could come from more modern sources. The real thing that I was rather bothered about when it came to the selections was the fact that there were only TWO poems in the entire collection and no short stories. I expected there to be a good mix of writings but instead the book was mostly just a bunch of quotes. Not only that but the poems that were included sandwiched the quotes between them since there was one poem at the beginning and one at the end. If I had expected this, I may have enjoyed the book more, but I truly had looked forward to this book mostly for the short stories that were promised in the synopsis and then was disappointed.

If you like The Addams Family as much as I do, this might be worth your time as long as you know what to expect!

Happy reading! Do you have a favourite spooky poem or novel?