I was pretty excited to read this book, since I’ve been a fan of the series for several years. When the fourth book came out, I was actually rather surprised because it had seemed like the series was over. I ended up really enjoying the fourth book (almost more than the original series actually) and so this fifth book was one I waited somewhat impatiently for. In the meantime, I reread the first three books, since I was starting to forget what had happened. I loved them even more than the first time I read them! Now I’ve read this next peculiar novel and I have some mixed feelings…

Title: The Conference of the Birds

Synopsis: “An instant bestseller, A Map of Days launched readers into the previously unexplored world of American peculiars, one bursting with new questions, new allies, and new adversaries.

Now, with enemies behind him and the unknown ahead, Jacob Portman’s story continues as he takes a brave leap forward into The Conference of the Birds, the next installment of the beloved, bestselling Miss Peregrine’s Peculiar Children series.” 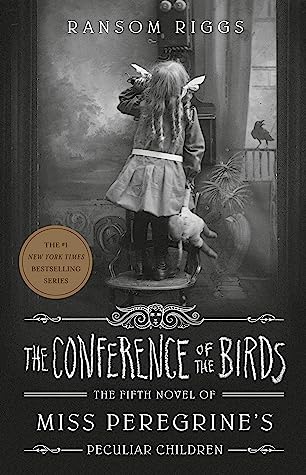 I’m surprised that I ended up giving this a 4.5 rating instead of a 5, but I only docked it because figuring out my feelings on this book hasn’t been easy. I loved the new ways the plot was going in the previous book, but then this one came along and changed everything. I actually was happily surprised by the fact that I had no clue anything was coming before it did. I also am not sure how I feel about the ending of this book (which was, naturally, another cliffhanger), though I can’t say too much without spoiling things. Suffice it to say that the plot made a lot of sense, but I’m a little sad about where it’s gone. Sad doesn’t mean bad, but I’m just nervous about what will happen in the final book and whether or not the conflict can be easily resolved in one more book. I guess I’ll have to see!

Besides the plot, I really loved being back with these familiar characters. It felt like I was hanging out with friends I hadn’t seen in a while. The character developments also took me by surprise, but I have no conflicted feelings here–I’m so happy with the way these characters have flourished and grown and it makes me so soft and smiley.

Overall, I thought this book was surprising in many ways and still genius, as always. I loved the characters and the new photos and even though the plot has gone in an unexpected direction, I am very much looking forward to the final novel in this series (but also not really, because I don’t want it to end). If you’ve read the other books in this series, you should definitely give this one a read because it is just as thrilling, heartwarming, and imaginative as the first four!